Some things (I think are) worth reading:

1. My friends’ new book blog: Take Five. This month, visit them for some summer reading suggestions to hide with in a cool dark room, far from the heat (or alternately to fry with on the beach).

2. This short piece I wrote on Adrienne Rich: The World As It Is: Learning to Read Adrienne Rich. (Also, the other things on JWA’s blog, Jewesses With Attitude, maybe starting with Tara Metal’s piece about Roz Chast’s new graphic memoir, Can’t We Talk About Something More Pleasant?)

3. I’m sure someone has told you this already, but Chimamanda Ngozi Adiche’s novel, Americanah, is probably as good as its best review says it is.

5. Ta-Nehisi Coates’s “The Case for Reparations,” published in The Atlantic a few weeks ago.

An endless rain is just beginning.
Into the ark, for where else can you go,
you poems for a single voice,
private exultations,
unnecessary talents,
surplus curiosity,
short-range sorrows and fears,
eagerness to see things from all six sides.

Rivers are swelling and bursting their banks.
Into the ark, all you chiaroscuros and half-tones,
you details, ornaments, and whims,
silly exceptions,
forgotten signs,
countless shades of the color gray,
play for play’s sake,
and tears of mirth.

As far as the eye can see, there’s water and hazy horizon.
Into the ark, plans for the distant future,
joy in difference,
admiration for the better man,
choice not narrowed down to one of two,
outworn scruples,
time to think it over,
and the belief that all this
will still come in handy someday.

For the sake of the children
that we still are,
fairy tales have happy endings.
That’s the only finale that will do here, too.
The rain will stop,
the waves will subside,
the clouds will part
in the cleared-up sky,
and they’ll be once more what clouds overhead ought to be:
lofty and rather lighthearted
in their likeness to things
drying in the sun—
isles of bliss,
lambs,
cauliflowers,
diapers.

Why I Might Read The Sense of an Ending

The short answer? Considering it won The Man Booker  (in 2011), it might be more reasonable to wonder why I wouldn’t read The Sense of an Ending. But when it came out, a few friends said they’d been disappointed by it. One friend hated it. For better or (possibly) for worse, I tend to skip prize-winning books written by men in favor of other books written by women. And so I skipped The Sense of an Ending.

But now I might read it. I’ve been staying in a house filled with someone else’s library. Like most things here, the books are well-chosen, eclectic and strongly individual: preferences for Flannery O’Connor, Gabriel García Márquez, Annie Dillard, Robinson Davies, and O. Henry prize-winning short story anthologies. There are also several paperback novels by Julian Barnes (who wrote The Sense of an Ending). I finally got around to reading one of them and it impressed me. That begins the long answer.

“Staring at the Sun”     by Julian Barnes

Staring at the Sun was published more than 20 years ago, in 1986. Before I checked the publication date, I would have guessed the book was more recent than that. Not that 1986 is so terribly long ago—this book just manages to feel quite contemporary as its story openly and skillfully travels forward from the past. Staring at the Sun follows the life of one woman, Jean Serjeant, beginning with her 1920s childhood adventures caddying for her charming, lonely, oddball Uncle Leslie, following her late-adolescent fascination with Sergeant-Pilot Tommy Prosser, a grounded RAF officer billeted with her family and then her late-WWII marriage to a police officer named Michael.

After twenty years of childless, largely loveless, and in her eyes, fairly typical conjugal partnership, Jean unexpectedly becomes pregnant. When her husband asks her what she plans to do, she replies “Oh, I’m going to have the baby and leave you…But I expect I’ll leave you and then have the baby. I expect I’ll do it that way around.” And leave him she does, raising her son, Gregory, in a state of perpetual flight from one low-rent apartment building to another. Once he is safely installed in self-sufficient adulthood, Jean continues to fly, traveling to China, the Grand Canyon, wherever she can manage, almost always alone. Her observations about the world are keen and intelligent and humorously matter-of-fact and her curiosity is unending. She’s a wonderful protagonist.

The novel wraps up as Jean Serjeant, now nearly 100 years old and living in a sci-fi-esque, eerily prescient, 21st century (where most information is instantly available via computer and you can apply to speak to TAT, a restricted-use area of the universal database whose acronym stands for The Absolute Truth), after a life spent thinking about how to live, begins to think about how to die. Even this has been made “easier” in the first years of the imagined new millennium.

This book was funny, smart and exquisitely well-crafted. The most compelling part of the novel for me was Jean’s relationship to a man she barely knew, the pilot, Tommy Prosser. As Barnes suggests through the delicate similarity between Jean’s surname (Serjeant) and Tommy’s rank (Sergeant), these characters share a deep, imperfect sympathy. Or at least, Jean shares a deep sympathy with her memories of Tommy Prosser. “I’ll tell you the most beautiful thing I’ve ever seen,” he says to Jean one morning in her kitchen, and then he describes for her an ordinary miracle neither of them will ever forget: flying back from France across the English channel one morning at dawn, he watched the sun rise in the east. Aware of how visible his black-painted plane was in the light, he climbed back into darkness and then dropped into such a fast dive that his speed drove the sun back beneath the horizon. As he approached England, it climbed out of the darkness for a second time. Two dawns on the same day. Strange, solitary beauty in the midst of a war full of horrors and loss.

Two dawns—the sort of thing you can’t really see if you obey the prohibition not to stare at the sun, or if you follow other rules that keep you grounded in normalcy. But the moment you disobey, you realize that some facts and impossibilities are little more than matters of popular habit and agreement. This is a book about Jean’s curiosity teaching her to disobey the major rule of her existence (“to obey”) and about everything she sees after that. It is also a novel about the rules that most concern us—you know, the ones about life leading inevitably to death—and how to go about living within them. It’s not a life-changing book, but it was a very good one. Good enough to get me to read something else by Julian Barnes. Like maybe The Sense of an Ending. 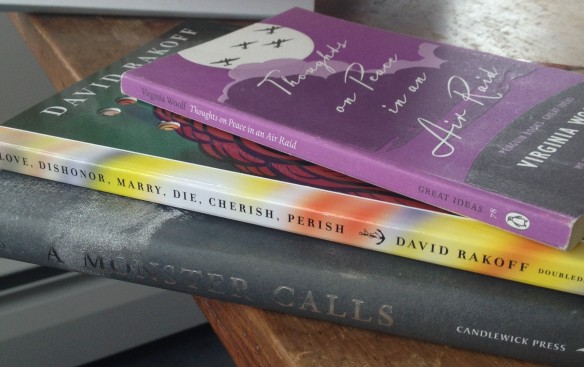 Yes, I still read real books on planes. And everywhere else, for that matter.

The short answer? I had to return the library book.

The long answer? Well, it starts with the fact that Willa Cather didn’t want me to read them.

“Before Willa Cather died, she did what she could to prevent this book from ever existing,” write editors Andrew Jewell and Janis Stout in the first sentence of their introduction to The Selected Letters of Willa Cather. “[Cather] made a will that clearly forbade all publication of her letters, in full or in part. And now we flagrantly defy Cather’s will in the belief that her decision, made in the last, dark years of her life and honored for more than half a century, is outweighed by the value of making these letters available to readers all over the world.”

A tough call, I think, weighing the rights and wishes of an author against those of her readers. Do readers really have such rights?

Various biographers of Cather have hypothesized as to why she constructed a will so overtly aimed at controlling the use of her correspondence, why she seemed so obsessed with protecting her privacy. I don’t know the details of Cather’s biography nor am I very familiar with her personality beyond what one can gather about an author’s mind through her fiction (more of a texture than a portrait). But as a letter writer myself, I can absolutely understand the desire to protect the privacy of my correspondence, to keep that avenue between my mind, writing the letter, and the mind that I’m writing it to, as narrow as possible. You can give a lot of yourself away in letters, especially if you’re writing to someone you trust. It’s one of the great things about the form, I think. I keep copies or images of most of my letters and whenever I look back over them, I realize I’ve admitted things I wasn’t aware of admitting, that I’ve struggled overtly with things I thought I was keeping closely under wraps, that I’m more palpably and vulnerably present on the page than I either intended or suspected myself to be. In my letters I see myself captured in moments of time so often exceptionally slender and always irrevocably past.

Cather may have had greater control over what she disclosed and did not disclose to her correspondents than I do—but even so, she had a right to protect her own privacy and she exercised it to its fullest extent. I don’t think there’s any great moral harm in collecting her letters at this point and I can understand the argument that her stature as a canonical American author demands this sort of breach of her personal privacy as a matter of respect for her public presence within the American literary tradition. This is a different era than the one Cather lived and died in—privacy is a different thing, maybe an impossible thing. I didn’t read the introduction to The Selected Letters of Willa Cather closely enough to remember whether or not the editors make a guess about Cather herself would say about her letters being published in this form today.

I’m not a Willa Cather scholar. I’m a Willa Cather admirer—I love the clean, elusive complexity of her prose, her confidence as a writer, the quiet theatricality in her use of frame narratives, and, most of all, the way she tells a damn good story. I know far less about her life and her character than Jewell and Stout. But I’ll hazard a guess: I bet Cather would say “Leave my letters alone. Go read my novels.” So until I’ve finished them all, I’ll do that.